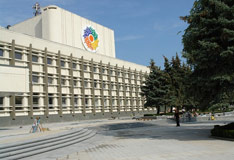 [1]As reconstruction works have been completed, the city’s and region’s main cultural facility – the Culture Palace “Peoples Friendship” – reopens concurrently with the newly refurbished square and fountain in front of it.  All repairs and reconstructions have been performed as part of the effort towards the implementation of “Preserve Your City” program initiated by Mr. Dmitry Firtash, Head of the Board of Directors Group DF. The funding to the project was provided by Cherkassy’s principal employer – “Azot” plant owned by Mr. Firtash. The overall budget of the project amounted ca. 50 million UAH while the reopening ceremony was organized on occasion of the 50th anniversary of “Azot” breaking ground.

The capital refurbishment in the Culture Palace building covered the total of over 20 thousand sq. meters. New comfortable chairs, a redecorated stage and modern sound and light equipment have been installed in the renovated odium seating 1000 spectators.  In addition to that, the square adjacent to the Culture Palace (over 14 thousand sq. meters) also underwent major reconstruction and now boasts an ultramodern dynamically lit fountain.

The first event in the reopened Palace was a concert show “Cherkassy, the Heart of Ukraine” which was telecast online on huge screens outside of the Palace for thousands of citizens gathering in the square. The show starred Oleksandr Ponomarev, Oleh Skrypka, finalists of “Voice of the Nation” TV show Antonina Matviyenko and Arsen Mirzoyan, Anastasiya and Victoria Petrik, as well as a pandorists trio “Braty”.

“Good understanding between the city community and “Azot” plant is absolutely critical. We attach tremendous importance to the city development, to making it a comfortable place to live and work in,” stressed Mr. Firtash as he was opening the gala-show.

The square in front of the Palace has traditionally been Cherkassy residents’ favorite place for walks and leisure and now, as it has become one of the city’s most spectacular spots, it will sure attract even more people. “This block has been impressively transformed becoming the first genuinely European spot in the city. We are extremely pleased to see Cherkassy’s renovation starting with the Culture Palace,” commented Galyna Burlaka, the Culture Palace Director. The People’s Friendship Palace is the principal venue for cultural events for the city of Cherkassy and for the entire region.