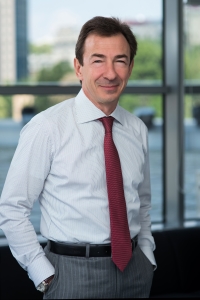 [1]Corporate Social Responsibility initiatives are only effective if a company’s top management and owners are involved, says Boris Krasnyansky, CEO of Group DF, which is the sponsor of The Days of Ukraine in the United Kingdom project. In his interview, Mr. Krasnyansky explained why the Group has chosen cultural diplomacy as one of its CSR priority directions, and how big businesses can promote their country’s image, while also sharing his dream.

Why did Group DF decide to focus on improving Ukraine’s image? How was this decision made?

Unfortunately, much of the world is still not very familiar with Ukraine. Although the country has been independent for 22 years now, what people know about it is still fragmentary, if any at all. There are still people who don’t think of Ukraine as a separate country and call people who live, for example, in Kyiv as ‘Russians’. So Group DF’s main objective is promoting knowledge about our country so that people recognize it, understand it and respect it. Ukraine has a lot to showcase, including prominent achievements in culture, sports and business, and it can be proud of its achievements.

From a business perspective, why is The Days of Ukraine festival being held in London?

London is the financial center of Europe. Ukrainian businesses require investments, and the London Stock Exchange is one of largest financial markets for Ukrainian companies to launch their IPOs. By advancing knowledge about Ukraine in the UK, we are potentially increasing the value of Ukrainian businesses that will eventually go public. We are replacing negative attitudes and perceptions with the positive ones. For businesses operating internationally it is much easier to engage in dialogue when their country is well known. As I said, Ukraine has so much to show to the world: literature, music, contemporary art, fashion, opera, and ballet. Not to mention our cuisine. The most delicious borsch is cooked in Ukraine.

Why did you choose cultural diplomacy as one of CSR priority directions of the Group?

This decision was taken by the Group DF Supervisory Council when the Group’s corporate social responsibility priority directions were considered. We decided to focus on promoting cultural values which Ukraine can offer to the world. Many organizations work on raising Ukraine’s positions in international ratings, such as Doing Business. At the same time, there’s a lot to be done on promoting Ukraine’s culture. Every respectful business organization has to have socially responsibility initiatives. These initiatives should concentrate on four or five priority directions, not to disperse focus and resources of this organization. For Group DF, cultural diplomacy is one of such priority directions.

How can a major business like Group DF influence Ukraine’s international image?

There are a number of ways, in fact. Firstly, by supporting and promoting Ukraine’s achievements and values, which is exactly what we do with The Days of Ukraine project. Secondly, by maintaining a clear and transparent dialogue with foreign partners to build up their confidence and trust, thus helping to develop Ukraine’s image as a reliable partner. One complements the other.

How often do you visit London? What’s your favorite place?

I first visited London in 1992. I had actually studied English since elementary school, but it was virtually impossible to travel abroad back then. Although I had often seen pictures of British attractions in books, I experienced a bit of a culture shock when I actually saw London with my own eyes. For me, culture and traditions are the quintessence of the United Kingdom: from the royal family, which still plays an important role, to popular fixtures like English pubs. I have favorite routes that I always try to take when in London: I go to Park Lane, Piccadilly, Trafalgar Square, Charing Cross, the Strand and Covent Garden. I am fond of the old London hotels where the floorboards squeak and you get an excellent English breakfast in the morning. The beer in English pubs is like no other beer in the world: it has no gas, it’s darker, and it has that special flavor. I’m not a big fan of beer, but there’s something unique about the atmosphere in British pubs.

I have a lot of dreams. One has to dream. In terms of what we’ve been talking about, I dream that every person who goes abroad carrying a Ukrainian passport is treated with respect anywhere in the world.