Oleksandr Gaidu, Chairman of Nika-Tera seaport, told INSIDER about the results of the seaport’s operation and about governmental initiatives which can promote the development of the port industry and Ukrainian transit competitiveness. 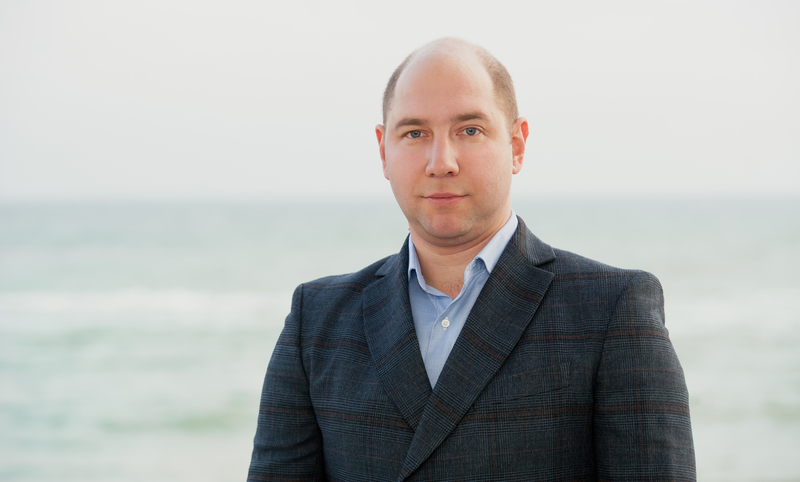 What volume of cargo did you expect for 2014? And what was the actual one?

In 2014, we handled 4.5 million tons of cargo, which was 21.2% more than in 2013. We maintained a positive trend. Of course, we wanted to handle a larger volume, but there were a number of negative factors out of our control.

Handling which cargoes reduced the most?

Hostilities in the Eastern Ukraine affected nitrogen fertilizer and coal export. Grain transhipment came to the fore and amounted to almost a half of the cargo traffic. Bulk and nitrogen fertilizers came to about 25% each. The rest of cargo was packaged cargo and a small volume of liquid cargo.

Growth dynamics of the transhipment will become possible due to logistics improvement inside and on the approaches to the seaport and modernization of existing technologies. We will focus our efforts on it in 2015. Our plans include remaining existing cargo traffic and increasing the volume of handled cargo.

What about the coal cargoes?

Our seaport dealt with export-oriented coal coming from the Eastern regions. After the infrastructure had been ruined there, exporters could not deliver their cargo. That’s why the operation ceased.

We had ambitious plans. We jointly with our partner prepared a transhipment programme concerning handling about 2 million tons of export coal with shipment of 150,000-180,000 tons per month. But the result is disappointing: there is no export at all.

For 3-4 months, we tried to stabilize the situation with bulk cargo: we looked for new customers, new cargo to load port facilities. Our long-term partner managed to convince Russian suppliers to direct transit coal cargoes to our port despite all the negative trends in Ukraine. It allowed us to avoid lengthy downtime.

What volumes are you talking about?

The expected volume of transhipment is 1-2 million tons of transit coal per year. We plan to make a coal one of the priority areas in handling ground storage bulk cargoes.

Our company signed a contract with Telestak (Russia) for the supply of the portable belt conveyors which will help to reduce the cost of cargo handling and improve operations’ productivity.

We have already paid the money and wait for a supply of the equipment in February. Purchase of the portable conveyor will allow minimizing the amount of involved technological transport for moving cargo, thereby reducing emissions from the equipment.

In order to operate with coal in the right quantities year-round, it is necessary to expand storage platforms and build additional internal railroad spurs.

Coal import can’t be promising for a country, which is one of the leaders in coal mining. Our main focus is export. Moreover, currently we work purposefully to increase cargo traffic of the transit coal, enhancing the handling rate every time.

Grain cargoes came to the half of the total cargo volume in 2014. Will the dynamics remain in 2015?

According to the results of last crop year, we handled the fourth of grain cargoes in Mykolaiv region. Considering the increase of the export potential of Ukrainian grain market in 2014-2015 against the backdrop of price increase on the grain market, stable demand from the importers, growth of the world quotes, we plan to maintain the positive growth of transhipment.

In 2014, the problem of the grain quality and proportions of food and feed grains came to the fore. This directly affected the operation of the port, as arrivals of cars with grain, infected with phytosanitary or storage pests above the first degree, had increased. For example, the government of Pakistan imposed a 20% duty on Ukrainian wheat due to low grain quality. 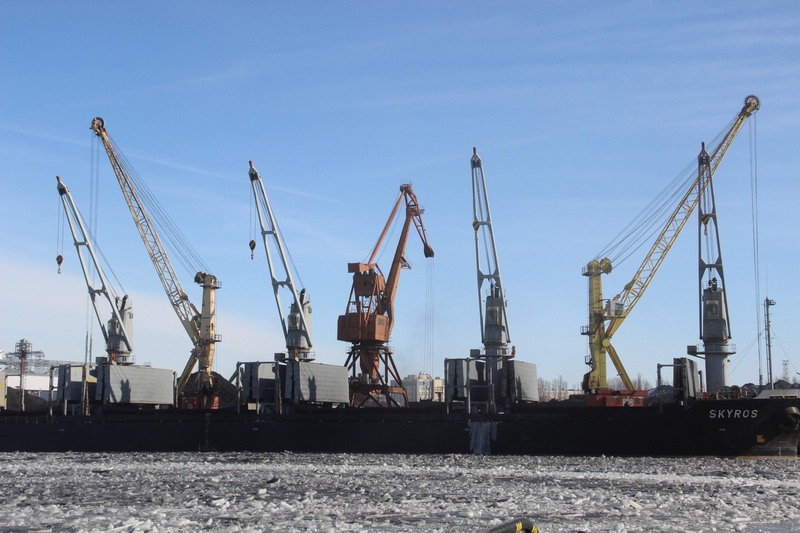 Did something from the former Crimean cargoes come to your port?

Suppliers, focused on grain supply through Crimea, redirected cargo to the nearest ports. Particularly, to our port, i.e. the supply logistics was revised.

Did chemical cargoes decrease a lot?

The number of chemical cargoes decreased in 2014. As you know, we launched a warehouse for urea transhipment focused mainly on products of Stirol. Due to hostilities planned transhipment volume was not accomplished.

However, Nika-Tera started handling urea from Cherkasy Azot in late November. Only we handle ammonium nitrate from Rivne Azot and mineral fertilizers from Rossosh.

Did the fertilizers production decrease significantly?

At the moment Cherkasy Azot has resumed operation, Rivne Azot operates. These plants weren’t just at a standstill – modernization of the equipment took place there. Severodonetsk Azot began working with imported raw materials. It will gradually cover needs of the domestic market. Therefore, OSTCHEM’s management says that domestic mineral fertilizers market will be covered in full.

Does Nika-Tera handle only Group DF’s chemical cargoes? Do you have any other suppliers?

In addition to Group DF’s cargoes, one of our priority and long-term partners is Belaruskali JSC. They supply potash chloride under different brands.

Is there any chance to return Belarusian potash cargoes, which went to the port of Klaipeda, partly owned by Belaruskali?

There is a chance for return it. We conduct negotiations with company’s new management.

We reload small batches of Belarusian potassium (white and pink) now. It is done by the direct variant: car-boat. We don’t store cargo in the warehouse and it allows the plant to cut logistics costs. Besides stabilizing the political situation, favourable price situation on the world market will help to intensify the efforts.

In addition to the military situation, the Belarusians were dissatisfied with railroad rates…

This question remained pending. Ukrzaliznytsia wants to see the actual volumes which Belaruskali intends to tranship through Nika-Tera. And only after that they will consider reduction of the railroad rate.

Partners from Belarus, in their turn, say: “Show us the letter from Ukrzaliznytsia, which refers to the tariffs reduction”. To make potassium reload through Nika-Tera profitable, plant’s logistics costs must be USD 1-2 lower than similar costs for cargo supply in the Baltic ports.

Will you start dealing with new cargoes?

We started transhipment of mineral fertilizers in big bags (flexible containers) in 2013. We want to remain and increase its volume. We bought a loader for work with this kind of cargo and trained employees to work with them and achieved high rates of loading.

This is important because the port is not able to attract additional traffic, if there is no high rate of unloading cars and loading onto ships. We try to increase the volume of handled liquid cargo, but now it is calm in dealing with bulk.

Due to unstable situation in Mariupol, we managed to attract a new type of cargo, traditionally loaded in Mariupol port – refractory clay. We handled a trial batch in December 2014. In 2015, we will continue to work with it.

Production equipment allows working with clay. Transhipment volume is not fixed yet – at least one ship per month. This cargo goes year-round and almost all the clay cargoes go to Italy.

Does the reform of ports help you to impose more favourable rates and attract streams?

The reform of ports allowed terminals’ owners to impose rates for provided services independently. At the same time we impose the rates according to tax legislation, legislation on pricing and market trends.

Private terminals must be included in waters of one of the public ports. What do you prefer: to be a part of Mykolaiv port or Oktyabrsk port?

Currently the name of the port we will enter is not known. Decision should be taken by the Ministry of Infrastructure. Generally speaking, it will not affect globally the port’s operation. We will continue to develop and modernize.

Do you have any suggestions for new Ministry of Infrastructure?

Former Minister established a working group for development of the maritime complex of Mykolayiv region, which included representatives of Nibulon, Nika-Tera and public ports. We would like to resume its work. We recently filed a letter asking about it. It is necessary to initiate a joint meeting with all members of Mykolayiv region, because everyone has his own suggestions.

It is important to deepen the Bug-Dnieper Liman channel (BDLC) for development of the maritime complex, but it implies large investments. Announced draft of BDLC is 10.3 m. Another 1-1.5 m of depth would enable the seaport to load Panamax-type ships directly at the berth. All the major players including Bunge, Nibulon and Noble Resources are interested in it. We are able to load about 50,000 tons per Panamax-type ship at the berth with additional load in the roads. Besides, it is necessary to expand Zhovtneva station, build bypass roads and railways. Implementation of these projects is impossible without legislative initiatives and government support.

To sum up, there are five items that would help the entire region: reduction of the railroad rate; dredging of the channel; decreasing rates of port dues in Mykolayiv region; electrification of the existing Zhovtneva railway station; construction of bypass roads and railways.

What investment plans do you have for this year?

It will allow the seaport to receive electricity of higher voltage and reduce transportation costs. We will complete installation of the shipping gallery on the 11th berth. Thus, we will be able to load two ships with grain cargoes simultaneously. Besides, we will complete gas supply of the company and construction of the exhibition railway park of the grain terminal.

What amount of investments is planned for 2015? Is this company’s money or loans?

The investments will amount to approximately USD 15 million. We manage with our own money, we don’t need borrowed funds. We used loans in 2014, now we return them orderly.