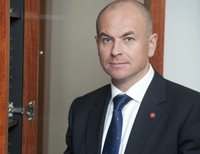 [1]The renowned banker spoke to ‘Fakty’ about what Ukrainian depositors should expect this year, what the best currency for savings is, and how much he expects the Ukrainian hryvnia exchange rate to fluctuate.

The National Bank of Ukraine statistics show that the volumes of household deposits are on the rise. Experts claim that bank deposits nowadays may be the only option for average Ukrainians to secure their savings from inflation and get some extra income. Dmitry Zinkov, Chairman of one of the largest Ukrainian banks, has spoken about the issues that concern depositors the most.

– Mr. Zinkov, how reliable is our banking system now?

– I would like to start by saying that last year Ukrainian banks recorded profit of about UAH 5 billion, for the first time since 2009. There’s no doubt that the banking system of Ukraine has weathered the crisis. The banks have formed their reserves and secured the necessary safety margins, thus safeguarding their depositors’ money. This process was facilitated, to a large extent, by stabilising the national currency exchange rate. According to the National Bank of Ukraine, the net volume of deposits made by individuals in Ukrainian banks over the last year increased by over UAH 51 billion. This number confirms that the trust in the banking system has been restored. You will agree that the trust from clients is an essential element of stability and reliability of banks. For example, our bank has increased its deposit portfolio by almost UAH 800 million.

– Yes, the negative period is behind us now. Nadra Bank’s current deposits came from people who were adamant that our bank had overcome the crisis, restored normal operations, as well as having a new shareholder which is a major financial and industrial group. To close this chapter I would like to remind you that all the ‘pre-crisis’ deposits were paid back to the last cent! Unfortunately, the process took longer than expected, which caused some understandable concerns. But eventually all those depositors got their deposits plus interest back. At the beginning of 2013, our net deposit portfolio reached UAH 5 billion. It’s the best evidence of trust, isn’t it? The bank has paid off all of its liabilities and is on a path of active growth. We are currently making significant investments in IT projects to improve the quality of our customer service and provide our clients with the best products on the market. In the nearest future, we are going to launch a user-friendly online banking service. Our strategic goal is to become a family bank. We want to offer useful and convenient banking products able to help optimizing family budgets, and meet the personal needs of every family member.

– I would say the problem for most Ukrainians is how to get some money in the first place, and what to do with it.

– I have to disagree with you. Sure, everyone can spend their money. But you also have to learn how make profit out of your money. I’ll give you a few examples. Let’s say a pensioner looks to make some profit on his savings to buy some gifts to his grandchildren. Or a young family is saving money to buy an apartment, but also want to be able to use some of this money should they decide to travel abroad next summer. All cases like that require professional assistance of a financial consultant. I am convinced that when people come to the bank wish to meet bank employees eager and able to listen, understand and help. This is even more important than technological innovations, which are undoubtedly important as well.

– Since the beginning of 2013, the deposit rates started to decrease and, with some currencies, even reached their minimum levels over the last few years. What will happen next?

– I believe the interest rates will continue to lower. Banks are not as concerned with attracting funds as they used to be. They are more concerned with finding the right place to invest, because the market of reliable borrowers is rather limited. This is especially true for deposits in foreign currencies, because people can only take loans in the national currency. Still this is not always the case. For instance, Nadra Bank decided to extend the campaign it launched before New Year which offers foreign currency deposits for 6, 9 and 12 months at 11% interest per annum. With the funds raised from deposits we are able to provide loans to legal entities. Overall, the deposit rates in Ukrainian banks will remain rather high. This means they will be attractive for clients, enabling them to counter the inflation and make some profit. You cannot get that by stockpiling your money under the mattress.

– Banks were actively involved in charity before the crisis, but we can barely hear about it now. Does the problem lie in a lack of funds?

– I cannot speak on behalf of every bank. But Nadra Bank has never stopped being active in charity. In 2005, Nadra Bank created the All-Ukrainian Charity Foundation ‘Children’s World’ and has been launching many charity projects since then. Last year, the ‘Children’s World’ implemented over 30 large-scale initiatives totalling UAH 1.5 million in charity funds. We provided more than 250 sets of furniture, office equipment and other goods to organizations supporting socially disadvantaged individuals, primarily, children and disabled people. We also provided hospitals and orphanages for children with food worth over UAH 600 thousand. In January and February 2013, Nadra Banks’ employees together with the ‘Children’s World’ foundation gathered and gave over various gifts to more than four thousand children in 26 rphanages and children’s homes in different regions of Ukraine as part of the ‘Bring joy to children’ charity programme. Children were also able to participate in interesting educational workshops and games.

– Many banks are currently offering higher deposit rates to pensioners.

– I believe it is the right approach, and an important part of Corporate Social Responsibility which every business should be involved in. Nadra Bank issues free cards for pensioners and other vulnerable groups of citizens. Understanding the needs and requirements of retired people, Nadra Bank came forward with its ‘Care’ package which facilitates access to pension funds at any convenient time and in the nearest branch of the bank. This package also provides discounts on various essential banking services. Pensioners can also pay their utilities bills at the bank branches without any commissions, as well as getting a 10% per year interest on their account balance. There are other advantages for this category of clients, such as favourable rates and extra bonuses. All ‘Care’ program clients who opened deposits with us get UAH 50 as birthday gifts.

– Last September you predicted that the UAH to USD exchange rate would not go rise higher than 8.5. You said: ‘Clients who are good at maths are not buying dollars’. At the same time, all experts were saying the rate would rise to 9, 10 and even 12. What is your current forecast? Which strategy should depositors follow now?

– The panic around hryvnia devaluation happens several times during the course of a year. There is no civilized foreign currency market in Ukraine nowadays, because Ukrainians keep playing the ‘buying for less – selling for more’ game. But it is impossible to make money on rate fluctuations (unless we are talking about hundreds of thousands of dollars). It’s much safer to put money on a deposit. To minimize the risks, I would advise to keep savings in different currencies: US dollars, Euros and hryvnias.

– Still, what is your forecast?

– The UAH to USD exchange rate indicated in the 2013 State Budget is 8.4. It means that there might be some minor fluctuations, but not major ones. By the way, for those concerned about exchange rates banks offer special deposits which allow access to their money at any time. People can add or withdraw any amount of money from their deposits whenever they wish to. In Nadra Bank this type of account is called the ‘Unlimited’ with a 19% interest rate.

– Many people are used to keep their savings in a foreign currency, because in our country major purchases such as cars and apartments are traditionally made in USD.

– As you know, the National Bank of Ukraine is going to impose restrictions on cash payments. As the result, deals will have to go through a bank, meaning that foreign currency will have to be exchanged to hryvnia before being transferred to a seller’s account.

– In which currency do you keep your savings?

– I would say the best option is to balance savings by keeping them in several different currencies, including hryvnia. In such a way you get profit from your hryvnia deposit and stability with a foreign currency deposit. Naturally, people who travel abroad on vacations, business trips or for treatment save up reasonable amounts in a foreign currency, which probably makes sense. But I can tell you that nowadays a credit card with hryvnia in your pocket can easily solve basically any financial needs you may have anywhere in the world.