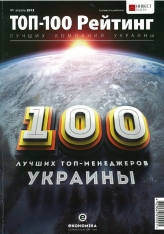 In September 2012, Boris Krasnyansky took charge of one of the largest Ukrainian holdings – Group DF. Besides the operating management, he is directly involved in developing the company’s strategy and decision-making for business diversification and restructuring. According to the top manager, he was invited to join the Group to change the way it works. Alexey Dolgikh, Kyiv Office Director from Pedersen & Partners Executive Search, led this conversation with the Group DF CEO exclusively for the TOP-100.

– Over the past year, Group DF went through many changes. What is the company like now in terms of figures, facts, business directions?

– We have recently released some figures that give a preliminary idea about the scope of our Group of companies. Group DF aggregate revenues total approximately $6 billion, and the Group employs more than 100,000 people. Today, we operate in 11 countries. The Group’s key directions include the chemical business focusing on manufacturing of mineral fertilizers, and the titanium business which we expand and want to develop actively. This year we plan to consolidate the gas distribution business. Nadra Bank is also a part of the Group, and we’ve got quite ambitious development plans for it.

The Group also has some non-core business directions: soda ash production, real estate, and agriculture, as well as a number of other, smaller assets, including the construction of gas infrastructure. Of course, any non-core asset may eventually become a core one. For example, agriculture. As a major business in Ukraine, it wouldn’t be right to not have big interests in this industry.

Above all, however, we set the goal for ourselves to be transparent and attractive to investors. We want to make the company comprehensible to both markets and financial platforms. We have very big plans for growth: we build the leaders in their respective sectors.

– What is your understanding of change management?

– This is a specific management process aiming to implement changes and achieve the objectives set by owners. Many managers think it’s easy; it’s just about issuing the right document, directive, laying out a business process on paper, or approving a resolution, and that’s it. The rest is the matter of discipline and obtaining the result. The experience shows, however, that this is not enough.

The greatest challenge for the manager who manages changes could be that most people he deals with may reject these changes. So, the manager should be extremely flexible, he must be skilled in communication and be patient. I know a number of managers who are considered strong top-managers but they have no patience whatsoever.

Many people in our country prefer an authoritarian management style. While this style is important for bringing change, it must be complemented by the qualities I have described above. Otherwise, the changes implemented by a manager might be rejected by the system. And such manager might be cast overboard, no matter how strong he is.

– What is your primary objective for this year that you are working on? How do you approach this project?

– I was invited to the Group specifically to change the way it works. Around 50% of my workload is focused on changes. The other 50% are handling the daily tasks.

For example, one of the projects is about introducing international accounting and auditing standards in each company individually and the Group as a whole. This is a huge objective. But it intertwines into the overall program of change which I work on. The whole process can hardly be divided into individual projects as it involves the legal structure, information systems, information protection, human resources management, media relations. These are the key changes which I have been working on over half a year now. And they will keep me busy for some time.

– Within what time period do you plan to implement these changes?

– Zhvanetsky has a phrase: renovation is not an action, it’s a state of affairs. I would like to prove this statement wrong in our case. I hope very much to see some significant results of the changes in two to three years. Are we going to achieve what we strive for within this timeframe? Probably not. Because there are many factors affecting this process. So, the tactical objectives may change.

– What things deserve attention when you do change management?

– I don’t see any specific reference points that would seem to be the most important in making sure you don’t let the changes slip. Follow closely how they develop and keep an eye out: register the signals of the market and the organization itself, analyze how you are being perceived. If the change process slows down, it means that things go wrong. I think that its pace should constantly accelerate. Because the processes begin to interplay as the critical mass is being gained.

At the beginning of 2000s, I worked to organize an operating model for the business I worked in, in fifteen countries of Eastern Europe as well as Greece, Israel and Turkey. I had to change the operating model, shift it from the country focus to managing business lines. I developed the strategy, held a road show, and then implemented it despite the fact that the results of those changes played against me as the business director for Russia. I’m apt to change; it’s just interesting to me. And I think it’s one of the rules: only a person who likes changes can manage them.

– What rules should the manager follow to manage changes effectively?

– First, he or she should engage as many people as possible in the change process. The more employees are involved in developing the program of change, the more colleagues are going to automatically take your side. Secondly, you can draw on new ideas while talking to your colleagues. Especially if the business is very complex and diverse, and it’s physically impossible to understand the details in each area. One should be able to listen, communicate, and get feedback. And not just pretend that you listen but really hear.

It is important to demonstrate at least some results. Some part of the changes requires a lot of work and is time consuming. When nothing happens for a long time, all participants of the “race” lose motivation. At that moment, it is necessary to throw something in, something that will keep the motivation. This is an element of art of its kind. You need to demonstrate some results, even the provisional ones.

– Changes can be either organic or induced. In your opinion, which ones can bring better results and in what situations?

– There is this American concept that the life is change. A business that doesn’t go through change is doomed. This concept largely determines the sustainability, viability and competitiveness of the U.S. economy.

In my opinion, there are no organic changes; they do not exist as such. If you mean the planned changes, they always lose to the induced changes. Induced changes keep everybody on their toes. They make you set absolutely clear objectives which you have to achieve within a set time. When you lose a piece of market every day, or the prices for your goods go down, you have to do something about it.

– The fact is that only in this case changes will be effective. You need a burning platform – a critical point. If you haven’t realized what exactly is on fire, the efficiency of change management will be low or doomed to fail. Internal communications are very important. People in the organization need to know what is happening and why change is necessary. The key argument of those who oppose change is that by changing some processes one may lose something that works well. This is a very strong argument, able to convince anyone, unless you face a critical point, a burning platform.

– Can you give some examples?

– Let’s say a company which leads in a market starts to lose its positions. One hundred largest companies, in terms of capitalization, listed at the London Stock Exchange, affect the whole stock exchange index. The top ten companies change frequently. Losing leadership is normal. But when you are among leaders, you feel relaxed. This is very dangerous, but it’s the human nature. When you suddenly start to feel that you lose positions, it’s the burning platform. If you don’t do anything about it right now but begin to act when you become the second or the third, by the time your measures give some effect, you will find yourself in the tenth place. The market is very dynamic. That is why it is the burning platform for the leader when it sees that it begins to lose the market.

Another example of the burning platform is when you suddenly see that you are losing your management or it doesn’t deliver results any more. Or, for example, you notice that the competitors’ management is more efficient, driving and dynamic. The company’s position is still good, you don’t lose the market yet, but this is already the burning platform. Because in the long run, it may result in the loss of the market share.

Who could imagine 10-15 years ago that Kodak, the world’s leader in sales of film and cameras, is going to go bankrupt? All photographers argued that the digital photography would never be able to produce such quality as the film did. So, everybody was sure that Kodak is going to be fine. At some point, however, the management realized that it was sitting on the burning platform, but it was too late. They haven’t realized the need for change in time. This is an example of how the right time could be missed.

IBM is a company which was a global leader in computer manufacturing for many years. But when personal computers appeared, IBM was the last of all major computer manufacturers to begin the production of PCs because they didn’t believe in the future of desktops. Because the company entered this market too late, it wasn’t able to compete on it and had to sell its business.

– What mistakes do top-managers make at the time of change; what do they turn the blind eye to, and what do they overlook most often?

– The greatest mistake is to expect quick results. Because they are not coming. In that case, a manager starts to get nervous and makes rash decisions because of his human nature. Then he fails to set a clear objective. Changes should be done when you understand why they need to be done. It is important to understand the starting position of the company and to gain support of your team. You definitely can’t manage changes on your own. And, of course, it’s absolutely pointless to start making changes without having support of the business owners.